A note about the maps: These maps are not necessarily to scale. For the first five books of the Wytch Kings series, the "map" was handful of roughly drawn blobs on a sheet of paper with a few lines to represent rivers and mountains. When I approached Chinchbug about doing maps, I did my best to dig out all the distance references in the books and work with that data, but I'm certain there are discrepancies. These are due to my lousy record keeping rather than Chinchbug's cartography. The maps are intended more to help readers visualize the relative positions of the kingdoms and landmarks rather than to serve as an exact map of the world, hence there are no scales given. As the stories progress and I discover more important locations, they will be added to the maps.

The Kingdoms of Skanda

The Kingdoms of Skanda as they are at the time of the Wytch Kings series (click to enlarge). 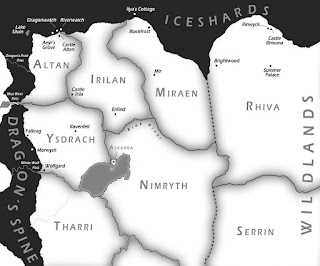 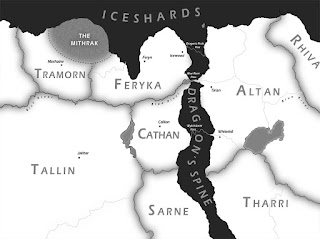