Mercenary is done and awaits only the final polishing touches. It will be available this spring from all the usual suspects. 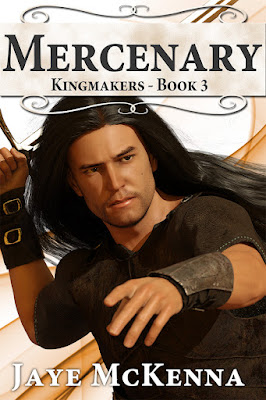 For Kai McKinnon, the town of Icewood is just another slap in the face. Stranded by his now-dead grandfather, Earth-born Kai is learning just how ill-prepared he is to survive untamed wilderness, monsters, and magic. The only bright spot is Coryn, the man Kai is coming to care for. But how long will the competent Coryn be willing to put up with Kai’s blundering attempts to learn the skills he needs to survive?

For Kai’s cousin Adrian, Icewood is an abuse-free paradise where he’s learned that he’s not crazy, but sensitive to energies no one on Earth is even aware of. Apprenticed to the mythe-weaver who saved his life, Adrian must now learn to control energies that make him powerful enough to kill with a thought.

For Coryn, the man who helped Kai and Adrian escape captivity, Icewood is a trap. An ex-assassin marked for death, Coryn fears he will only bring danger to the peaceful town — and to Kai. The smart thing to do is leave, but his feelings for Kai make that impossible.

When Adrian disappears, a rescue mission into the heart of the most dangerous forest on Aion forces both Kai and Coryn to face their deepest fears head-on. Can they find Adrian and bring him home before it’s too late? Or are they all doomed to die in the depths of the Mithrak?
Posted by Jaye McKenna at 9:27 AM