Askarra, the seventh and final book in the Wytch Kings series is now available at Amazon and Smashwords, and should be available at other retailers in the next few days. 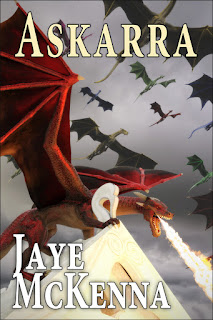 After the Wytch Council’s failed attempt to destroy the city of Ravenfell, the Wytch Kings of the Northern Alliance are divided over how to respond. Those in favor of swift retaliation would send in their dragon army supported by rhyx-shifters, who can transport soldiers to any spot in Skanda in the blink of an eye. Those who urge caution fear the ancient weapon planted at Ravenfell may not have been unique.

Renegade Wytch Master Ilya knows the mind of the Council all too well, and fears the dark path the Alliance may be forced to tread in the name of freedom. He has a plan, but when his husband Wytch King Garrik refuses to hear his counsel, Ilya sees no choice but to act in secret.

Captain Kavarr’s body may be healed, but his confidence is shaken. Torn from the psychic connection he shared with the rest of his shifter pack, he no longer considers himself fit for command. But his new immunity to the mythe makes him an ideal candidate for a dangerous secret mission that could change the course of the war.

Prince Delrinian of Ysdrach has been the Council’s pawn for nearly half his life. Newly freed and eager to prove his loyalty, Rin finds himself thwarted at every turn by his overprotective brother. When a chance to strike a crippling blow to the Council presents itself, Rin volunteers to help — even though his sometimes-prophetic dreams warn that the price of his involvement could be the life of the man he’s falling for.

As you may have noticed, I don’t have a new release for you yet. I had hoped to have the third Kingmakers book out this month, and then Askarra, the final Wytch Kings book, by the fall.

Best laid plans and all of that.

Due to a rather annoying repetitive stress injury, I've had to train myself to type using the Dvorak layout, which is a more ergonomic keyboard layout. I started learning it nearly a year ago, and have only recently managed to truly accept the necessity of permanently switching (read: quit whining and cheating by going back to the qwerty layout “just for today”) and get on with it. Using the Dvorak layout is definitely helping with the repetitive stress issues I have, but it is also slowing me down, but not nearly as much as the family stuff I have going on.

Without going into a lot of detail, we lost my mum to cancer just before xmas, and the months leading up to that were busy, stressful, and exhausting in more ways than I knew I could be exhausted. The months following have been busy, stressful, and exhausting in different ways, with my dad needing a lot more help and attention than any of us anticipated.

Things have finally settled into kind of a routine, though I don’t have the kind of writing time I had before. I am writing again, though not at the pace I was a few years ago.

About a year ago, when things started looking bad for my mum, I had decided to push Kingmakers out farther and get Askarra done next, since the dragon stories were Mum’s favorite, and I wanted her to be able to read the end of the series. That didn’t happen, but since I managed to get Askarra about a third done before we lost Mum, I decided to finish it before going back to Kingmakers. Now that I have a little more space in my head for story stuff, I’m hoping to have it done by the end of summer/beginning of fall, but that will depend on how things go with my dad, and of course, how things go with COVID-19 and all the fallout from that.

In response to all the lockdowns happening all over the world, Smashwords is having an Authors Give Back sale. From now through April 20, three of my series starters are free on Smashwords: Burn the Sky (Wytch Kings 1), Psi Hunter (Guardians of the Pattern 1), and Khalshir (Kingmakers 1). I’ve also priced them at $0.99 at Amazon. In addition, I’ve tweaked the ending of Burn the Sky, so if you want to pick it up for free at Smashwords, you can download the tweaked version and check it out. I’ve been meaning to go back and rework the ending, which upon rereading, I decided was perhaps a bit abrupt, but haven’t had time.

Hopefully by the time I release Askarra, this virus and all the chaos it has caused will be largely behind us. In the meantime, I hope you all stay healthy!
Posted by Jaye McKenna at 11:34 AM

Email ThisBlogThis!Share to TwitterShare to FacebookShare to Pinterest
Labels: What It's Like Outside My Head, Wytch Kings
Newer Posts Older Posts Home
Subscribe to: Posts (Atom)