Falkrag is on track for a late August release, and I wanted to share the cover art with you. This is the first one of the Wytch Kings series to have a character in human form on the cover, and Prince Shaine of Rhiva got the honors. Once you've read his story, you'll understand why we chose these particular elements for the cover. 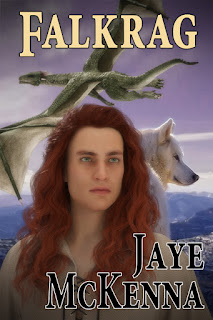 Falkrag (Wytch Kings 5)
Newly released from his bondage to the Wytch Council, Prince Shaine of Rhiva strives to prove that he can be trusted. Burdened by guilt and shame, but determined to help the Northern Alliance win the coming war against the Wytch Council, Shaine ventures into the Iceshards to investigate an ancient ruin rumored to contain a hidden cache of powerful weapons. He doesn’t get far before being badly wounded by a deadly mountain predator.

Son of the hunt leader of his village, Vorri is destined to one day lead his people, a group of exiled shifters from Rhiva who have survived in the dangerous Iceshards for nearly three hundred years. When the hunters who keep the village fed begin disappearing, the fearful village elders forbid anyone to seek them out. Determined to save the missing hunters, his own brother and sister among them, Vorri disobeys, and sets off alone to find them.

When Vorri saves Shaine from certain death, the two young men strike a bargain: Vorri will help Shaine find the ruin, and Shaine will aid Vorri in his search for his kin. But fulfilling the bargain turns out to be far from simple, and in the end, Shaine and Vorri’s actions could change both the course of the war and the future of Vorri’s people.
Posted by Jaye McKenna at 10:26 AM