Are you ready for a new series? This one is called Kingmakers, and it's another M/M fantasy romance series that will probably run to six or seven books before I'm done. Or possibly more--I know where I'm going, but not quite how I'm going to get there, or who might grab my attention along the way.

Book One of the Kingmakers series, Khalshir, is coming in March. It's the story of Rio and Dani, and as seems to be my habit, also introduces one of the main characters for Book 2, Renegade, which will be coming later this year, or possibly early next. Depends on how much Life(TM) happens between now and then.

If you haven't seen the awesome cover Chinchbug did for this one, here it is: 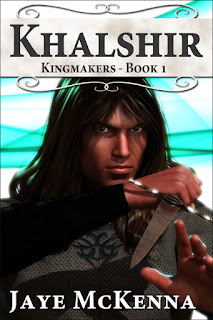