Dragonwatch, the fourth Wytch Kings book, will be available in September. This story is about Tristin of Ysdrach, the bastard cousin of Wytch King Garrik. In the last book, Shadowspire, Tristin was instrumental in foiling the Wytch Council's plot to install him on the throne of Altan as a puppet king. Now recovering from years of imprisonment and addiction at the hands of his uncle and the Council, Tristin is struggling to make peace with his past and move forward into a future he's not quite sure what to do with. 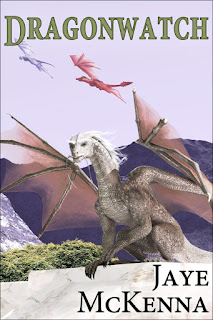 The balance of power in Skanda is about to shift…

Tristin hadn’t even paused to dress before fleeing down the tower stairs with his clothing clutched against his middle. Fortunately, it was late enough that no one was about in the hall leading to the royal apartments, and Tristin reached his suite without frightening the servants or causing any unfortunate incidents. He closed the door firmly behind him and let his clothing fall to the floor.

What had he been thinking?

Well, he hadn’t been thinking, had he? He’d been half asleep, enjoying the feel of Mikhyal’s hand rubbing his head and neck. It had felt so nice to be touched, even in dragon form, that he’d let himself forget everything else.

Mikhyal must have been absolutely horrified when he’d shifted back. Tristin knew very well he was no prize. He’d avoided mirrors for the most part, but he’d caught enough glimpses to know that his body was still gaunt and wasted, and the scars…

In the brilliant wash of moonlight, there was no way Mikhyal could have missed seeing his scars. The prince wouldn’t even want to dance with him now, and he’d been so looking forward to that.

Maybe he should have stayed at Dragonwatch, after all.

Tristin trudged into his bedroom where he curled up on the bed and squeezed his eyes shut. The things that had pleased him so much when he’d first stepped into the room now seemed only that: things. They wouldn’t keep him company when he was lonely. Nor would they gently rub his head and neck, or tell him how beautiful he looked in the moonlight.

A hot tear trickled down his face.

Tristin started and sat up. Dirit was perched on the foot of the bed glaring at him. The little dragon was bathed in silvery moonlight, making him look like some sort of glowing spirit.

Dirit tapped a long claw on the bedpost, and a glowing ball of yellow light appeared over his head, illuminating the room. “I want you to go and speak to His Royal Restlessness. He’s been in a snit ever since he returned from the tower.” Dirit narrowed his eyes. When Tristin didn’t respond, the dragon continued, “It’s impossible to sleep with all the muttering and pacing.”

“Ah. Well. I… imagine that’s because I disgust him,” Tristin murmured.

“Humans.” The dragon rolled his eyes and twitched his whiskers in apparent disgust. “So dramatic. You think you disgust him, and he’s certain he’s frightened you off. Matchmaking really isn’t part of my mandate, you know, but it appears that neither one of you is bright enough to realize that you’ve had a misunderstanding.”

Tristin stared at him, open-mouthed, as he tried to work out whom Dirit was insulting. Both of them, it sounded like.

The little dragon peered at him, eyebrow tufts drawing together in a frown. “You do know what a misunderstanding is, don’t you?”

“You could start by putting some clothing on,” Dirit prodded.

Heat rushed to his face, and Tristin scrambled off of the bed and went to fetch his clothing from the main room of the suite.

“Not those.” Dirit appeared in front of him, grabbing a mouthful of Tristin’s breeches and yanking them out of his hand. He spit them out on the floor as if they tasted bad, then wrinkled his snout. “They’re all rumpled and dusty. You simply cannot go courting in dirty things.”

“Have you no sense of decorum?”

“Decorum isn’t exactly a priority when you’ve been locked in a tower for most of your life,” Tristin explained. He snatched the rumpled breeches from the floor and clutched them against himself in the vain hope of preserving both modesty and dignity. “Anyway, I haven’t got anything else.”

Dirit swarmed across the floor and disappeared into the bedroom, taking the ball of light with him and leaving Tristin in darkness. A moment later, the dragon — and the light — returned. “You’ve an entire dressing room full of clothing fit for a prince. Come along, we haven’t got all night. Honestly, do I have to do everything for you?”

With Dirit’s assistance, Tristin selected a pair of dark blue breeches and a grey linen shirt. When he was dressed, he brushed his hair and tied it back with a little strip of black leather.

“Yes…” Dirit circled him, hopping up on the furniture to observe him from all angles. “Of course, a proper bath would have been better, but if I’m to get any sleep at all, we simply haven’t time. I don’t expect you’ll progress to the point where that’s really necessary, not tonight. His Royal Virtuousness is far too much of a gentleman to be invading your dignity with his most impressive royal masculinity on the first encounter.”

“Invading my dignity?” Tristin sputtered. “With his—”

“You’ll do quite nicely. That really is a charming shade of pink. Lovely contrast with the shirt. Come along, then.”

Tristin could only stare at the dragon, speechless. It wasn’t until they were entering the guest wing that he found his voice. “What if… what if he’s gone to sleep? It must be well after midnight by now.”

“A bit past two, actually,” Dirit informed him. “But he’s awake.”

Dirit’s ears flattened. “I can feel him. I’m attached to him, remember? Bonded. Cursed with constant awareness.”

Unable to think of anything else to do, Tristin followed the little dragon through the castle’s dimly lit hallways. The guardsmen posted at regular intervals said nothing, but Tristin hunched his shoulders, certain they were watching and judging. They probably thought he was off to some clandestine meeting of the most sordid kind, and he couldn’t help feeling conspicuous and rather overdressed. Face flaming, he trudged miserably down the hall after Dirit.
Posted by Jaye McKenna at 8:14 AM No comments: