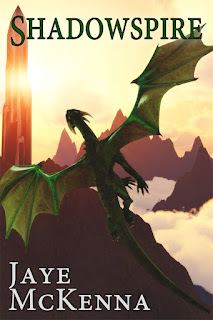 Shadowspire, the third book in my M/M fantasy series, Wytch Kings, is now available at Amazon and Smashwords, and will be coming to other retailers soon.

If you used to shop at All Romance, please note that I have the same formats ARe used to carry (mobi, epub, and pdf) available at Smashwords.

Book Description:
Shy and bookish Prince Jaire of Altan is not particularly enthralled with the idea of marrying the simpering Lady Bria of Irilan, but Altan needs to renew its ties with the neighboring kingdom. For the sake of the alliance, Jaire is willing to do his duty, even if he would much rather marry a prince.

Sole survivor of the massacre now called the Irilan Rebellion, Prince Vayne of Irilan disappeared so long ago, no one even remembers his name. Trapped in the mythe to protect a secret that could change the balance of power in Skanda, Vayne has been fighting to retain his sanity for centuries.

When Jaire sees the ghost of a handsome young man dressed in fashions centuries old, he fears he might be losing his mind. But the ghost proves to be far more than a restless spirit, and might just hold the key to Altan’s future, as well as the key to Jaire’s heart.
Posted by Jaye McKenna at 10:46 AM