So Shadowspire (Wytch Kings, Book 3) is nearly ready for a late January release. I just have final edits and proofreading to get through. Today I have cover art to show off, and a tiny taste of the story. Chinchbug gets better with every cover, I think. Here is his latest: 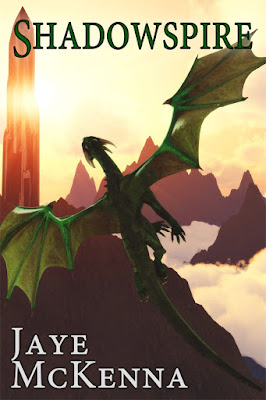 Shy and bookish Prince Jaire of Altan is not particularly enthralled at the idea of marrying the simpering Lady Bria of Irilan, but Altan needs to renew its ties with the neighboring kingdom. For the sake of the alliance, Jaire is willing to do his duty, even if he would much rather marry a prince.

When Jaire sees the ghost of a handsome young man dressed in fashions centuries old, he fears he might be losing his mind. But the ghost proves to be far more than a restless spirit, and might just hold the key the northern kingdoms need to break free of the Wytch Council’s ever-tightening grip, as well as the key to Jaire’s heart.

“Breaking the amulet is the only way,” Vayne said softly. “And you must help me do it.”

Jaire stared up at Vayne. What if he broke the amulet and Vayne ended up dead? Or lost? Though he’d never touched the ghost-prince, the thought of being the cause of the man’s death troubled him deeply. “I… what if it kills you?”

“I think that’s a chance we’ll have to take. If you can free me, I can go for help. If you don’t free me, there’s no chance. What will Garrik do when they threaten you to gain his cooperation?”

“I… I don’t know,” Jaire whispered. “He’ll be terribly angry. And… and Garrik doesn’t always think clearly when he’s angry. And he especially doesn’t think clearly when I’m involved.” He didn’t like to imagine what Garrik would do. Whatever it was, it wouldn’t be well thought out, and would likely place Garrik in terrible danger. He closed his eyes and let out a small sigh. “I suppose you’re right. If there’s any chance of freeing you so you can go for help, we had best take it.” He swallowed hard and raised his head to meet Vayne’s eyes. “Thank you. For risking yourself. What must I do?”

“Take the amulet off and let’s see if we can free the stone.”

With shaking hands, Jaire drew the fine silver chain over his head. For a moment he squeezed the stone tightly in his hand, then opened it to reveal the emerald green gem wrapped in an intricate net of fine silver lying in his palm.

“See how the setting wraps around it, protecting it?” Vayne asked. “It’s designed to break easily. Hold it up to the light, and you can probably see the flaw deep in the crystal. It shouldn’t take more than the pressure of your boot heel to shatter it, once it’s free of the setting.”

Jaire blinked to clear his vision and examined the amulet closely. He lifted it to the light, and indeed, there was a dark fault line deep inside it. Jaire studied the metalwork cage, found a spot near the top where two small loops of wire were twisted together.

He pointed them out to Vayne. “I think if I unwrap these… it looks like it will open the setting and free the gem.”

“Do it,” Vayne whispered.

His fingers were swollen and bruised from hammering on the stone, and it took a few tries to get hold of the fine loops. Once he began untwisting them, it went quickly, and before long, the intricate wire mesh holding the gem opened enough for him to tip the stone out into his hand.

“Now you must crush it,” Vayne said.

“I would do it for you if I could, Jaire, but I cannot. You must be my hands in this. Whatever happens, you must not blame yourself. I am asking you — I am begging you — to break the gem. Please, Jaire. End my exile. Give me the chance to help you.”

Vayne’s words gave him strength. Vayne wanted this and so Jaire would do it for him. It would be selfish to keep the ghost-prince trapped just because Jaire wanted his company.

He rose unsteadily to his feet and moved away from the wall.

“Just crush it beneath my boot?”

“Ai,” Vayne breathed. “I believe that will be enough.”

Jaire set the gem on the floor and stared down at it, then turned his gaze to Vayne. He studied the ghost-prince for a long, long time, memorizing the lines of his face as he did. “If this doesn’t work… I just want you to know I’ve enjoyed your company very much, and I wish… I wish I could have known you better. I would like to have touched you.” He felt his face grow hot, but he kept his eyes fixed on Vayne, who gave him a sad smile.

“I would like to have touched you, too, Jaire.”

“Right then. Let’s do this.” Jaire raised his foot, squeezed his eyes shut, and brought his boot heel down hard on the gem. The moment it shattered, a ripple of power shivered through the mythe. He opened his eyes to see Vayne on his knees, open-mouthed, eyes wide with shock before the ghost-prince vanished.
Posted by Jaye McKenna at 8:25 AM