Eye of the Storm Cover Art

Eye of the Storm (Guardians of the Pattern, Book 5) is in the final edit stages, and due to be released in early September. I just got the final cover art from Chinchbug, and here it is: 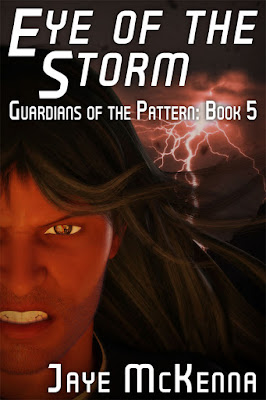 Wealthy playboy Nick Romani is a trouble-magnet. When the local news net obtains compromising pictures of him with a prominent politician’s married son, Nick’s exasperated father exiles him to a remote research facility until the scandal dies down. When Nick learns what kind of research he’s expected to do, he balks. Instead of obeying his father’s orders, he heads out alone into the wilderness.

Ajhani Guardian Vaya Rhivana has chosen exile over a slow death by the drug that binds his uncontrollable power over the mythe. Before Vaya finds the strength to leave his clan, his sister’s son is kidnapped by the Sky People. Heartbroken, but too weak and sick to help rescue his nephew, Vaya heads off into the mountains, not expecting to return.

When a storm dumps an injured Nick at Vaya’s feet, Vaya’s first thought is to kill him. Only a whisper of prophecy stays his hand. An uneasy bargain is struck, and as the two exiles journey through the dangerous wilderness, Vaya finds his feelings for Nick slowly changing. Can Vaya keep his promise to Nick and see the bargain through? Or will the power he struggles to control destroy both himself and the man he’s beginning to love?
Posted by Jaye McKenna at 7:43 PM

Email ThisBlogThis!Share to TwitterShare to FacebookShare to Pinterest
Labels: Books, Cover Art, Guardians of the Pattern, My Stories