Ghost in the Mythe: Cover Reveal and Excerpt

Ghost in the Mythe, Book 3 of the Guardians of the Pattern series, is nearing completion, and is on track for a June release. Chinchbug did up an awesome cover for it, and here it is: 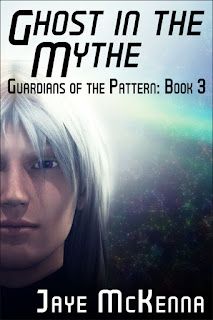 And just to whet your appetite, here's another little taste:

It didn’t seem like very long before the flickering shades of Cameron’s concern filtered down through the depths. He felt it as a gentle tug on the thread he’d left connected to the place where his body rested.

It hadn’t been nearly long enough, not for Miko, but he forced himself to follow the currents back up. When he opened his eyes, he found Cameron sitting on one of the couches that lined two of the walls of Miko’s office.

Cameron looked tired. Dark smudges shadowed hard, brown eyes, and his usually neat auburn hair was tousled, as if he’d been running his fingers through it. The realization that he had no idea how much time had passed while he’d been drifting sent a twist of guilt through Miko’s stomach.

The moment Miko’s eyes opened, Cameron leaned forward. “Are you all right?” he asked quickly.

Miko blinked as the lights of the office and the intensity of Cameron’s concern jerked him fully out of the mythe. The transition into reality was sharp and cold, leaving his body shivering and his mind reeling.

He dipped mental fingers back into the net and flicked on the voice synth unit. Miko forced an apologetic smile and said, “Drifting.”

The synthetic voice coming from the speakers on the walls was flat. Miko rarely bothered using the inflections the software was capable of. He’d never got the hang of making the voice match what he wanted people to think he felt, and it was far too easy to be misinterpreted.

Miko’s own voice was gone, taken from him when he’d first touched the raw mythe during a routine passenger run gone horribly wrong. The ship he’d been on had been thrust into jump space unexpectedly, and Miko had been the only survivor.

He still wasn’t sure that survived was an accurate description of what had happened to him. Warped, perhaps. Changed, for certain. But survived?

Hardly. Not when all he wanted was to drift back into the mythe.

“You’ve been gone a long time. I got here just before dinner to meet with you. It’s nearly midnight now. Another hour or so and I was going to carry you down to the infirmary.”

Miko checked the net. Cameron was right — he’d been gone for hours that had felt like mere minutes. He bit his lip and looked away. He’d done it again — worried Cameron without meaning to.

“You were gone long enough to have me worried.”

He wasn’t sure how to respond to that. The same words could mean so many different things. Delving deeply enough into someone else’s mythe-shadow to discern an emotional context that didn’t always make sense to him was both exhausting and painful. Miko found it so uncomfortable that he’d given up trying, except where Cameron was concerned.

In the back of his mind, the soft colors and textures of the mythe beckoned, and he reached for them, entranced by the songs that touched the edges of his awareness.

“Miko!” Cameron’s voice penetrated his thoughts, his mythe-shadow flaring hot and spiky with fear. It hurt, and Miko flinched.

“You went away again. I thought…” Cameron shook his head. “Never mind what I thought. Do I need to help you to bed?”

Miko had never seen the point of bed — he’d just as soon sleep here — but part of Cameron’s definition of normal included sleeping in a bed at night and eating his meals in the Institute’s communal dining room.

“I’m not sleepy,” Miko said, struggling to focus his full attention on Cameron. “I’m sorry I missed the meeting. What did you need?”

Miko cocked his head and frowned, unsure what the connection was.

Cameron let out an exasperated sigh. “I have to be up early, so we’ll make this brief. I’m meeting with the Command Council tomorrow to report on our progress in locating the missing psions. Have you found anything more? Anything I can legally use, I mean?”

“Anything your net could show you? No.”

Cameron leaned forward again, his expression eager. “Anything it couldn’t?”

“Echoes and shadows. Whispers in the mythe.”

“Connections… but… deep inside of data structures that exist mostly in the mythe. Your net only sees the simplest of the shapes and patterns. The tip of the iceberg. Your Command Council… they want things that human senses understand… surveillance vids and tracking logs. You can’t put the color of a thread or the flavor of a whisper in your report.”

“No. I can’t.” Cameron’s mythe-shadow shimmered with the colors of disappointment.

“I’m sorry.” Miko forced a smile. “I’ll keep trying.” He hated letting Cameron down. He did his best to please the man who had been his savior. Cameron had sacrificed much to free Miko from the hell of slavery: career, livelihood, reputation… all those things that Miko couldn’t quite grasp the importance of.

All the same, he did his best to go through the motions of being human so that Cameron would believe he was normal. And happy. Even though Miko knew he never would be.

He loved Cameron for wanting those things for him.

Email ThisBlogThis!Share to TwitterShare to FacebookShare to Pinterest
Labels: Books, Cover Art, Guardians of the Pattern, My Stories, WIP Excerpt

Here's a little taste of Leythe Blade, the M/M fantasy I'm planning to have out by the end of the summer. And check back in a couple of weeks for the cover reveal for Ghost in the Mythe, which will be released in June.

Jace turned around and stalked back to the bedding. He grabbed up his clothing and dressed quickly, hauled on his boots, and buckled on his sword belt.

“Don’t let his sacrifice be for nothing, Jace,” Gwydion’s voice came from behind him, gentle but firm.

“Sacrifice?” Jace spun around to face him. “What have you Seen?”

“Nothing clear. Nothing certain. And too many possible futures to have any idea whether or not this course will lead to an outcome we desire.”

“So you chose to let Fate decide,” Jace said bitterly.

“I chose to let Sasha decide. He’s a grown man, Jace, not a child. He can make his own choices. And live with the consequences.”

“Have you so little faith in him?”

“I have little faith that Karn will give up. Or show him any kind of mercy. I’m going after him. I only hope I’m not too late.”

“What of your vow to Arrik?”

Jace narrowed his eyes. “You were quick enough to follow me when I went after him at Cliffwatch.”

“The path was clear to me then. It is… unclear now. Going after Sasha could be the death of us all.”

“What does that even mean?” Jace tugged at his own hair, wanting only to leave this place and hunt down Sasha. He wouldn’t rest easy until he had the man in his arms again.

“It means that it’s more important for us to escape Tallin than it is for us to rescue Sasha. Whether that means Sasha will rescue himself, or whether that means that my role in future events is more important than his, I cannot tell you. All I know for certain is that my gut feeling is that you and I should head for the border as quickly as possible.”

“You,” Jace spat, “are the most manipulative son of a bitch I know.”

Gwydion gave him a pained look. “Believe me, it does not do my heart any good to do this. It feels as if we are abandoning him. But going after him feels worse. I’m sorry I can’t be any more explicit than that. I’ve explained to you before how frustrating the Sight can be.”

Jace closed his eyes in defeat. His heart yearned to go after Sasha, but his duty was to see Gwydion to safety. “Fine. We’ll pack up and be on our way. But the minute I have you safely across the border, I’m heading back here. I’m not leaving him.”
Posted by Jaye McKenna at 7:45 AM