Burn the Sky is on track for a mid-January release, so I (finally) get to show you the cover Chinchbug did for it. 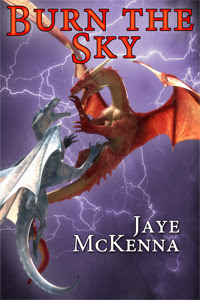 And here's a little taste to whet your appetite:

Master Tevari opened the saddlebag that Kian had abandoned. He pulled out a set of chains and manacles, similar to the ones Garrik had glimpsed in the castle dungeons on the rare occasions when he and Jaire had crept down there to explore.

“What are those for?” Garrik asked, worrying his lower lip between his teeth as he eyed the chains.

Garrik let out a nervous laugh. The Wytch Master arched an eyebrow. His expression was deadly serious, and Garrik swallowed his laughter. “Whose protection?”

“Yours. And mine and Kian’s, should things come to such a pass.” Tevari handed the chains to Kian and motioned for Garrik to enter the nearest bedroom. Garrik sat on the bed and removed his boots and his heavy overtunic.

A few moments later, the Wytch Master entered the room, wooden cup in hand. He offered it to Garrik. “Drink this, Your Highness. All of it.”

Garrik sniffed the liquid and wrinkled his nose. It had a foul smell, and bubbled and fizzed ominously in the wooden cup. “What is it?”

“It will help lower your natural defenses, easing the way for me to seek your power.”

He drank it down, nearly gagging at the taste, then lay back on the bed. Kian’s movements were brisk and efficient as he locked the metals cuffs around Garrik’s wrists and ankles.

Kian finished securing the chains to the bed frame and slowly met his gaze.

“Are you truly so frightened?”

Kian’s eyes flicked toward the Wytch Master and then back to Garrik. “It is your safety and your sanity I fear for, Garrik,” he whispered. “Are you certain this is what you want?”

“It is,” Garrik said. “Not just for Altan, but for Jaire. What kind of life will he have if the Wytch Council forces him to take the throne?”

“What kind of life will he have if you are dead?” Kian whispered fiercely. “Have you thought of that? Who will protect him then?”

Dead? Garrik’s certainty began to waver. Kian and the Wytch Master surely knew what they were about. If they were both frightened…

He gave himself a mental shake. What Kian and Tevari thought didn’t matter. There was no other way to protect Jaire. He tore his gaze from Kian’s and focused on the Wytch Master. “I’m ready. Do it.”

The Wytch Master moved to his side. “Then prepare yourself, boy. Because this will hurt.”
Posted by Jaye McKenna at 7:01 AM