Gremlin's Last Run (Guardians of the Pattern: Book 2) is still on track for an October release, so it's time to reveal the awesome cover Chinchbug did for it. 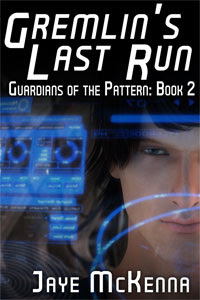 That's Rhys on the cover (that's Captain Tyler to you, dirtsucker), and here's a little taste...

There was a flicker of tension from somewhere nearby, something leaking through his faulty shields. At the sound of the cabin door sliding open, Alek whipped his head around to face his captors.

He couldn’t make out anything beyond a fuzzy shape in the dim light until the figure across the room slapped the control panel, bringing the lights up.

The brightness stabbed through his head. Alek winced and brought his hands up to cover his eyes. His captor said nothing, and when the pain finally receded, Alek lowered his hands to see a familiar figure leaning against the door watching him with an unreadable expression. Tousled black hair, pale face, dark circles of exhaustion under his eyes—this was the man Alek had slipped past while he’d been busy with the cargo chief. He still wore the black flight suit, and even up close, there was no corporate logo or insignia of rank to be seen.

A slow smile spread across the man’s features as he studied Alek. “You can call me Captain for now. And I think I’ll be the one asking the questions here.” His voice was husky, and he spoke Standard with an accent blurring his vowels. He shifted his body slightly to display the weapon in his hand.

Alek went cold at the sight of the needle gun. Not a weapon he’d expected to see in the hands of a civilian. Not a weapon he wanted to be on the wrong end of, either. Those tiny slivers of metal might not clear the muzzle with enough velocity to damage the hull of a spacecraft, but they shredded flesh like nobody’s business.

“Now,” the man said, “how ‘bout you tell me just what the hell you thought you were doing in my cargo hold? Besides bleeding all over the place, I mean.”

Alek swallowed around a suddenly dry throat. If this had been a corporate ship, his status as a Federation agent might have been worth something, but here it could get him killed. He tried to speak, but all that came out was a croak.

His captor leaned toward the small desk built into the wall and picked up a water bottle. He approached slowly, holding it out to Alek. When Alek reached out to take it, the captain let go, jerking his own hand back quickly, as if he was afraid Alek would make a grab for him. Woozy from pain-killers and secured to the bunk, he couldn’t imagine that he looked like much of a threat.

He sucked down a mouthful of cold water, then set the bottle in one of the recessed spaces at the head of the bunk. “Thank you.”

The captain had moved back to his spot by the door. He nodded briefly and fixed Alek with an expectant look. “Now… cargo hold?”

“Yeah. Cargo hold. Look, I’m sorry about that. I didn’t have a lot of choice. Can we… start over, maybe without the needle gun? My name’s Alek. And you are…?”

His captor raised one dark eyebrow and made no move to put the gun away. “I’m the man who didn’t vent the cargo hold or turn around and dump you in the lap of Station Security. I’m also the man who fixed you up and put you to bed, so you can damn well do me the courtesy of explaining yourself.” His lips curved in a grim smile. “Or you can take a walk out the air lock. I don’t much care which, and I’m warning you, my bullshit tolerance is at an all-time low right about now, so you might want to consider your story carefully before you begin.”
Posted by Jaye McKenna at 7:00 AM

Email ThisBlogThis!Share to TwitterShare to FacebookShare to Pinterest
Labels: Books, Cover Art, Guardians of the Pattern, My Stories