A Discovery Most Alarming

Over the xmas holidays, I made a Most Alarming Discovery. It finally dawned upon me that when I leave those little yellow sticky-notes around the house as Gentle Reminders to the Spawn to get off their lazy arses and pull their collective weight, they don't actually read said sticky-notes. Yeah, I know, I'm a little slow, or as Husband Beast would say, Distracted.

Case in point, the Saga of Getting the Spawn to Take Responsibility for the State of Their Bathroom. (Yes, I'm aware that this is a battle I will undoubtedly lose.) 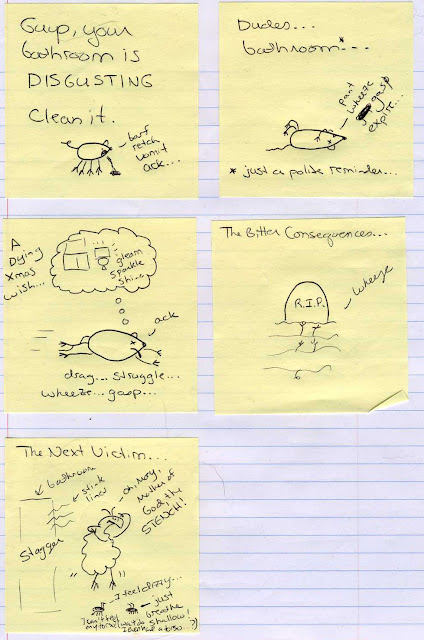 The bathroom did eventually get cleaned, and not by me. Which would have counted as a Major Victory, except for the fact that the following weekend, the Saga began anew...
Posted by Jaye McKenna at 9:59 AM No comments:

Email ThisBlogThis!Share to TwitterShare to FacebookShare to Pinterest
Labels: Random Stuff, What It's Like Outside My Head

Down to Brass Tacks

I have just one New Year's resolution this year: quit wasting so much time on the internet.

Regrettably, this doesn't get much writing done. And unfortunately, if I'm reading author blogs or scouring Goodreads for my next read, my brain is perfectly capable of justifying this as writing... or research... or market analysis.

To that end, I have unplugged my writing computer from the internet and set up the decrepit, ancient, snail-paced laptop in the other room. I have equipped it with a mushy, unresponsive keyboard, a mouse that is far too small for comfort, and an extremely uncomfortable chair.

Now if I want to go online, I have to sit on a horrible chair and use equipment I hate, and wait ten seconds between page loads... hardly worth the effort, right?

And what's even better? In order to get the writing computer back online, I have to crawl under the desk to plug the cable in. With my back the way it is right now, that is just not happening. (Well... it could happen, but then I would be stuck under the desk until someone took pity on me and rescued me, and I shudder to contemplate the logistics of that.)

Eventually, I'll be able to crawl under desks again, at which point I'll have to come up with a different way to outwit myself.

Or maybe I'll just have Husband Beast set a few mousetraps back there.
Posted by Jaye McKenna at 8:58 AM No comments:

Today I'm over at Adrian J. Smith's blog for an interview. We've been conversing via email for a while now, getting to know each other. She had lots of great questions, and we talked about writing and publishing in general, and a little bit about the process of turning the novella, Human Frailties, into a novel. Stop over and check it out! And while you're there, the giveaway is still running through January 16th. Enter for a chance to win a copy of Human Frailties, Human Strengths.
Posted by Jaye McKenna at 9:35 AM No comments:

Today is the day I get to show off the awesome cover art that Chinchbug did for Psi Hunter. Brandon Shire is graciously hosting a cover reveal and an exclusive excerpt on his blog! If you'd like to see the gorgeous cover and get a little taste of the story, head on over there!


Posted by Jaye McKenna at 7:44 AM No comments:

Email ThisBlogThis!Share to TwitterShare to FacebookShare to Pinterest
Labels: Cover Art, Guardians of the Pattern, Roadtrip

More Bloggy Roadtrips and a Giveaway!

I have a couple of cool things to tell you about. First is that I'll be visiting Brandon Shire's blog on Friday, January 10th, and you'll finally get to the see the awesome cover art Chinchbug has done for Psi Hunter and get to read an excerpt!

Then on Monday, January 13th, I'll be over at Adrian J. Smith's blog for an interview. Adrian is doing a giveaway on her blog right now, and you can win a copy of Human Frailties, Human Strengths or one of two books by Francis James Franklin by logging in here. The giveaway runs through January 16th.
Posted by Jaye McKenna at 8:33 PM No comments:

A couple of weeks ago, I worked up the 2014 Master Plan... which is a (probably too ambitious) list of what projects I plan to work on and what kind of release dates I'm looking at for the next year. All of which is subject to the whims of Fate, Real Life, Kids, Dogs, the Universe, and Everything Annoying that Comes Between Me and My Writing (which is, you know, everything).

At any rate, here is the (definitely too ambitious) list of stuff I'd like to get out the door this year:

Psi Hunter: Book 1 of the Guardians of the Pattern M/M sci fi series. Working on the edits for this one. I'm looking at late February/early March for the release. If you want a sneak peek, I'll be doing the cover reveal on Brandon Shire's blog on the tenth of January, and there'll be an overview of the series and an excerpt and everything. (Except I don't think there will be confetti... I'm afraid I go a bit mad when there's confetti, so it's probably safest to avoid it altogether.)

The Deep Dark: Book 1.5 of the Guardians of the Pattern series, a not-yet-written short/novella that will introduce Rhys, one of the main characters in Gremlin's Last Run. I've got a solid idea for this one, just need time to get it down. I'm hoping to release this in the spring.

Gremlin's Last Run: Book 2 of Guardians of the Pattern. First draft of this one is written and has been torn apart, ready for the rewrite. I'll be working on the rewrite as soon as Psi Hunter is out the door. Hoping to have this one out in the summer.

Facing the Music: Book 2.5 of Guardians of the Pattern, a not-yet-written short/novella. This story will be the sequel to Facing the Mirror. It will focus on the events that occur directly after the events in Facing the Mirror, and gives a bit more background on Miko, who is a main character in book 3. I want to have this one out in the fall.

Book 3: Book 3 of Guardians of the Pattern is thus far untitled. First draft is done, and I'll be starting the rewrite over the summer. This may be out at the end of '14, but given my apparent lack of control over Fate and the Universe, more realistically, it'll be early '15 for this one.

Looking Even Further Ahead: I'd like to have the entire Guardians of the Pattern series done and released by the end of '15. Five books are already drafted and just need rewriting/tidying up. But I've got an idea for another Big Problem for my intrepid band of heroes to deal with, which may just require a second series. I've also got a M/M dragon shifter novel I'm playing with, and an epic (book 1 is in the second draft and sitting at a whopping 250K) M/M fantasy series that is mostly drafted.

What I really need is ten more hours of consciousness a day... I had it on my xmas list, but Father Christmas did not leave it under the tree for me. Not that I'm ungrateful, or anything... I mean, he would have been well within his rights to leave me a sock full of reindeer poo, and he didn't do that, either, so I guess I shouldn't be too bitter about it...

Posted by Jaye McKenna at 9:59 AM No comments: