Chinchbug has been on a creative roll lately. He's working on the covers for all five of the Guardians of the Pattern novels in one fell swoop because he wants to tie them all together thematically (I hope this is artist-speak for make them look cool, but you never know).

Last night he was working on the cover for Book 3, and he showed me the initial renders so I could tell him if the model looked the way I pictured the character. Our impromptu creative consultation session went something like this:

So anyway, here's the cover Chinchbug worked up for the soon-to-be-released short story, Facing the Mirror. 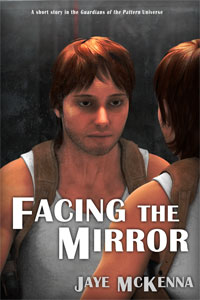 That's Cameron on the cover. He's the main character in Facing the Mirror, and he's a secondary character in most of the Guardians of the Pattern novels. Eventually, I'd like to give him his own novel, because he has an interesting story to tell, but for now, he's going to have to wait.

And in case you were wondering... he's not wearing any pants, either.

Email ThisBlogThis!Share to TwitterShare to FacebookShare to Pinterest
Labels: Cover Art, Guardians of the Pattern, My Stories, What It's Like Outside My Head