Husband-Beast (aka Chinchbug, to his artist friends) has done a gorgeous cover for Human Frailties, Human Strengths, and I wanted to share it before the story comes out. He's currently hard at work on covers for the five-book sci fi series, the first book of which will be out in early 2014, if all goes according to plan (shh... don't tell the Universe I said that...). The nice thing about having my cover artist living in my house (and dependent on me for meals, laundry, bathroom cleaning, and kid-wrangling) is that we can have conversations like this:

Jaye: Dude, can you make Ash look a little more evil?
Chinchbug: (not Husband-Beast, because he's in Artist Mode, and we have to Respect that) Evil?
Jaye: Yeah, you know, like he eats puppies for breakfast, or something.
Chinchbug: Hmm... I think I might actually have a template for that...
Jaye: (impressed) Really?
Chinchbug: After reading your synopsis and character descriptions for that sci fi series, I figured I was going to need a lot of shocked, terrified, and generally miserable dudes for the covers.
Jaye: (shuffling feet) Er... they get happy endings...
Chinchbug: Yeah, well, let's just say I'm glad I don't live in your head and leave it at that, shall we?

So yeah, it's like that at my house. Anyway, here's the new cover: 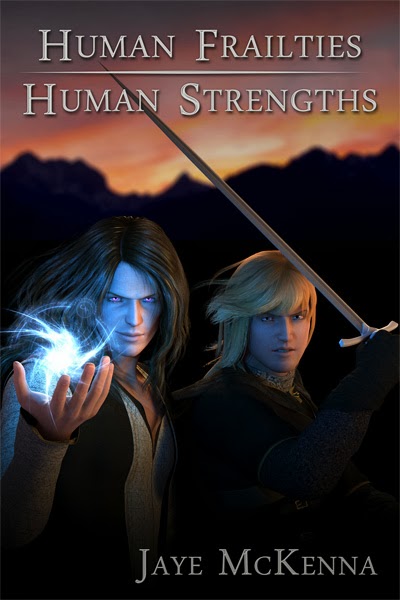 Posted by Jaye McKenna at 8:47 AM No comments:

Email ThisBlogThis!Share to TwitterShare to FacebookShare to Pinterest
Labels: Cover Art, My Stories, Why My Characters Don't Invite Me To Their Parties

I’m coming down the home stretch on this project. I’m on the final proofread and polish run now, and a lot of the formatting is figured out (I can make very pretty .mobi files now). I’m still planning to have Human Frailties, Human Strengths available on Smashwords and Amazon at the end of this month or early next. I’ll be updating here, and closer to the time I’m ready to release it, I’ll post the new cover (it’s gorgeous!). For now, I’ll leave you with another snippet of Fun with Tor and Ash:

Excerpt:
Inside the shelter, Tor sank down and sighed with relief as the warmth began to sink into his chilled flesh. “You know, I can put up with an awful lot,” he said, glancing briefly at Ash, “but I’m getting pretty tired of being kept in the dark. Especially about things that concern me.”

Ash gave him a grim smile before dropping his pack on the ground and squatting down beside it. “It’s probably a good thing you can put up with a lot. You’ll have to, bonded to Carrik Tarn as you are.”

Tor scowled. “You say that like I had a choice about it.”

“You’re the one who picked up the sword.”

“What? I should have let the rhyx eat me?”

“It might have been more peaceful if you had.”

Ash pulled a cloth-wrapped bundle of travel cakes from the pack and passed it to Tor. “Of course I wouldn’t have wanted the rhyx to hurt you.” Ash’s voice held a note of exaggerated patience that had Tor gritting his teeth. “But I could wish that if you were going to make the acquaintance of a leythe-blade, it had been any but that one.”

Always thinking of your own comfort, eh, Vaya? Seven hundred years, and nothing much has changed, has it?

Ash rolled his eyes. “I was wondering when you’d wake up and take notice.”

Tor set the packet of travel cakes down, unopened. He wasn’t going to let Ash distract him with food or sex like he usually did. Not until he had some answers, at least. “Ash. You turned your lover into a sword. That doesn’t exactly fill me with confidence when I think about what might happen to me in the future.”

“Rest assured there would be little point in doing the same thing to you. You don’t have the skills.” Ash shot a dark look at the sword as he passed a waterskin to Tor. “Or the temperament.”

Why don’t you tell the boy what happened, Vaya? Oh, sorry, it’s Ash now isn’t it?

Tor took a long drink and then passed the skin back. He gave Ash an expectant look. “I told you earlier you owe me an explanation.”

“I can ask Blackfang,” Tor said. “I’m sure he’ll be happy to tell me every smutty detail. Blond slut, did you say, Carrik?”

Blackfang was only too happy to comply. Ah, yes, the blond slut. Pretty little thing, he was. He promised me immortality.

As long as one disregards such inconveniences as complete dependence upon my bearer, I’ll concede the point. But that doesn’t change the fact that you never said anything about spending the rest of eternity trapped in a fucking sword.

“You’re immortal. What the hell else did you want?”

Full disclosure would have been nice. And perhaps a chance to refuse your… gift.

“You wouldn’t have refused and we both know it.”

You never gave me the chance.

Ash rolled his eyes. “It wouldn’t have made any difference. Your brain never was anywhere near the size of your ego.”

“Shut up!” Tor clapped his hands over his ears, even though he knew it wouldn’t do any good. “Both of you just… shut up!”

Ash shot the sword a threatening glare, then let out a long-suffering sigh. “Humans. You have to know every single insignificant detail, don’t you?”

Tor stared at him in disbelief. “The reason why you turned your ex-lover into a sword is hardly insignificant. Considering I’m your current lover, it seems very significant to me.”

Humph. Surely I made more of an impression than that?

“I’ve already told you why it’s my business,” Tor said, adopting the same perfectly reasonable and utterly condescending tone Ash often used with him. “If you don’t want to come clean about it, you can damn well sleep alone tonight, because I won’t be warming your bed.”
Posted by Jaye McKenna at 9:09 AM No comments: